The AfterMeat - who is writing the future of food

As human societies have evolved over time, from hunter-gatherer communities to highly sophisticated and industrialized agricultural systems, meat has always been present in our diets, regardless of geographical location or social status.

Nearly 350 million tons of meat are consumed every year (44 kg per person) - requiring 80% of land used for agricultural purposes for its production (pasture plus cultivation of animal feed) and making for a market worth 1.8 trillion dollars.

A recent study by A.T. Kearney found that 46% of all grains grown globally are converted into feed for livestock - while only 37% are processed into food for humans.

The toll of meat consumption on the environment is manifold: the livestock supply chain accounts for 15% of global greenhouse gas emissions according to FAO studies, including "direct" methane emissions, which is over 80 times more effective than CO2 at trapping radiation in the atmosphere. Production of 1 kg of beef requires 7 kg of grain, 16,700 liters of water (including that for irrigating feed) and 550 m2 of land for raising livestock and producing feed. Thus, considering its direct and indirect consequences, meat production represents the leading cause of global deforestation and involves the consumption of a third of the water resources used by humans.

Meat consumption is going down

The Intergovernmental Panel on Climate Change (IPCC), a UN body, has estimated that eliminating any food of animal origin from the diet of the world population would avoid the emission of up to 8 Gigatonnes of CO2 equivalent each year, out of a total of about 50 Gigatonnes emitted overall, in 2017. 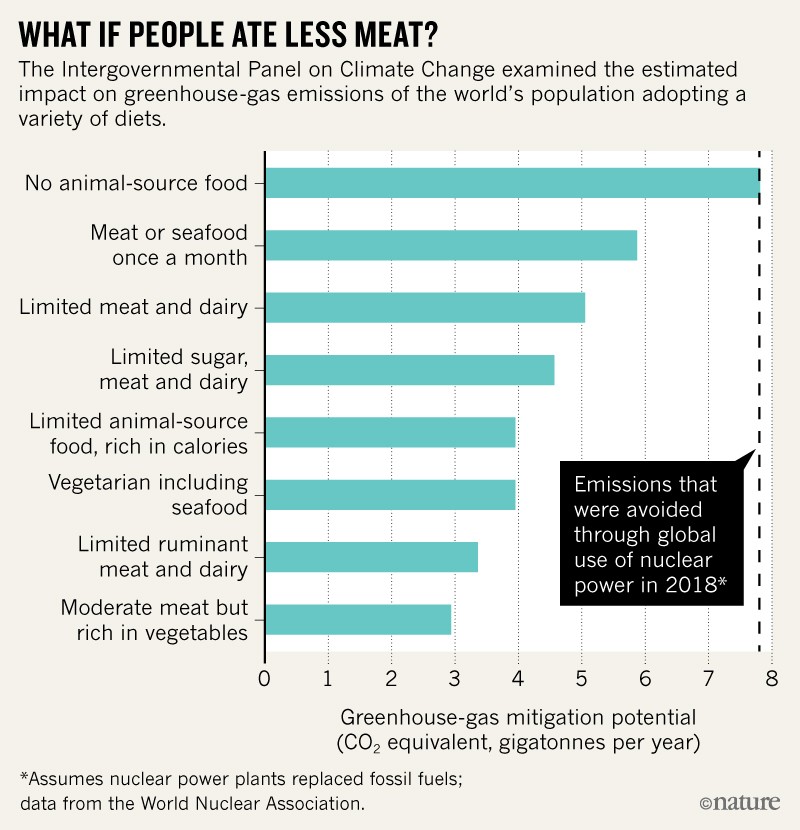 But apart from the number of vegans and vegetarians, currently equal to 8% of the world population and growing slightly, a new kind of sensitivity towards the issue of climate change is introducing important changes in the diet of many, and shaping a new industry.

The new alternatives: meatless-rare or well-cultured?

According to analysts and investors,to meet this demand for “meat without meat”, two newcomers in the Food Industry are revolutionizing the concept of hamburgers, chicken nuggets, pulled pork and many others.

These American startups, Impossible Foods and Beyond Meat, gave rise to the expression "meat without meat". Their goal is to faithfully reproduce the appearance, texture and taste of meat using exclusively vegetable raw materials. 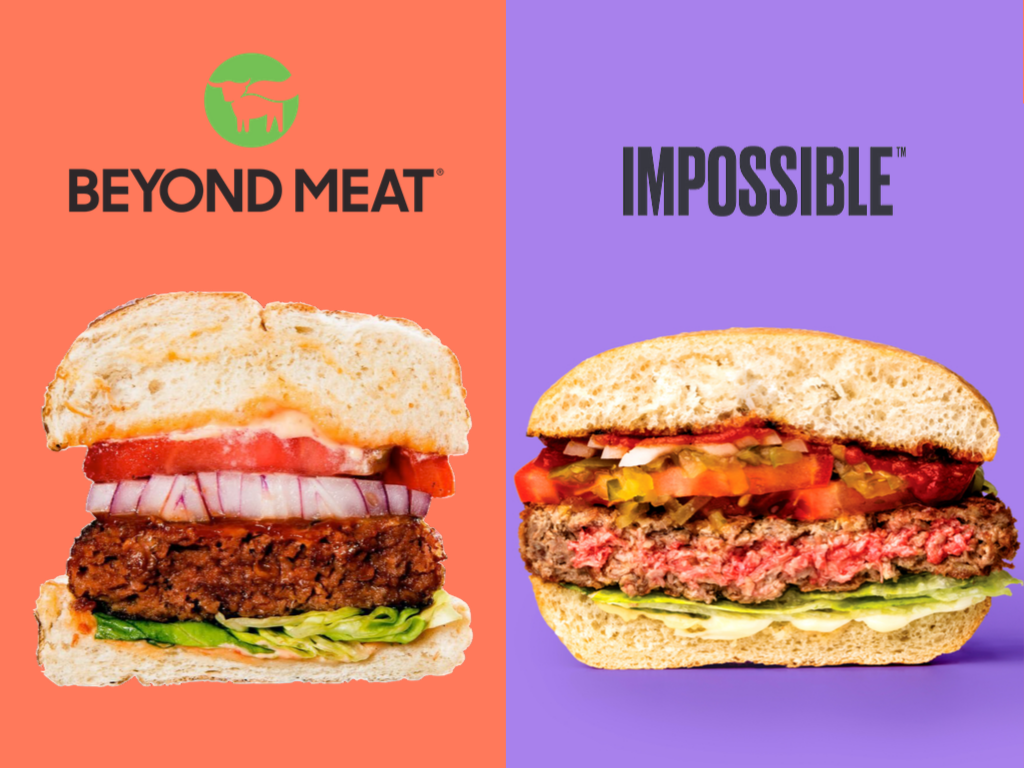 What differentiates the two competitors is first and foremost the main source of protein in the burger patty - soy protein for Impossible, pea protein for Beyond Meat- as well as their corporate structure. Beyond Meat went public in 2019  while Impossible is still private but aims to raise $1 billion by this year - and, at least for now, seeks to diversify its product mix.

Beyond is betting on burgers and chicken nuggets while Impossible has already launched on “veg” pork mince and keeps sausage and bacon in its sights in the medium term, and fish on its launch pad.

Both have already landed, at least for testing purposes, on the counters of American fast-food behemoths such as Burger King (with the Impossible Whooper launched in St. Louis and now present throughout America) and KFC (which in Atlanta, offers its customers the Beyond Fried Chicken).

But beware, these are not the only two players on the market: a special mention goes to Novameat, founded by an Italian, based in Barcelona, ​​the only one to exploit 3D printing to produce vegetable "steaks". 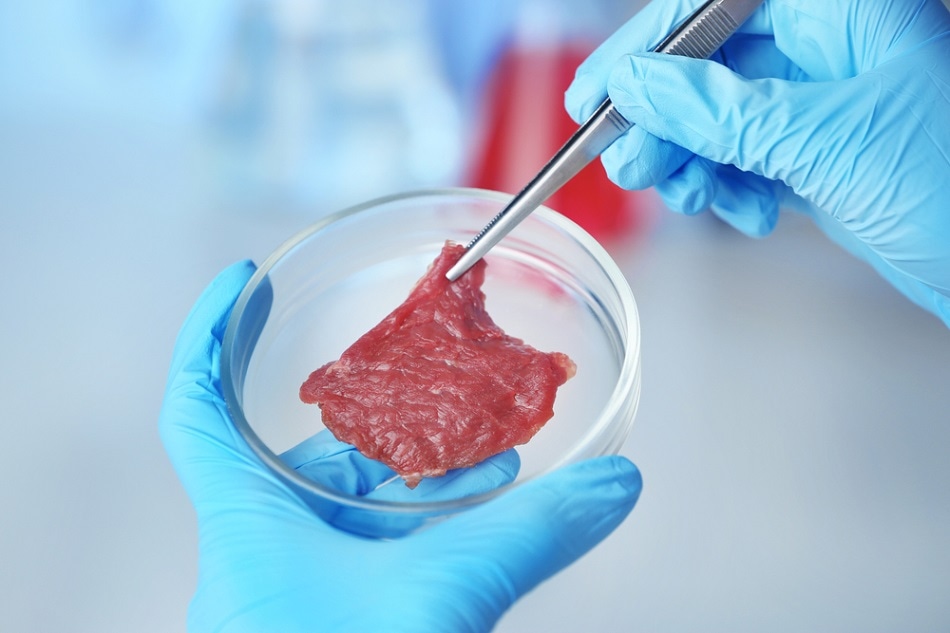 The second trend is that of 'cultured meat', which aims to recreate in vitro all the typical constituents of the steak (muscle tissue, fat, connective tissue, and blood vessels) starting from a small number of stem cells taken from the animals themselves - eliminating the need to raise them en masse and then slaughter them. The principle is anything but simple and uses some stem cells - called satellite cells - taken from the animal and immersed in a culture medium in which, continuously supplied with nutrients and oxygen, the cells multiply at very high speed. The costs of making a hamburger have drastically dropped from $ 250,000 in 2013 to $ 50 today, and an increasingly large number of Startups - such as Israeli Aleph Farms, Super Meat, and Bio Food Systems - are completing this new democratization of meat 2.0.

Together, "meat without meat" and "cultured meat" will account for 60% of global consumption by 2040 - an impressive figure estimated by A.T. Kearney - greatly improving the conversion rate of plant calories to animal calories: a paltry 15% today, a rosy 70% with the technologies of tomorrow. 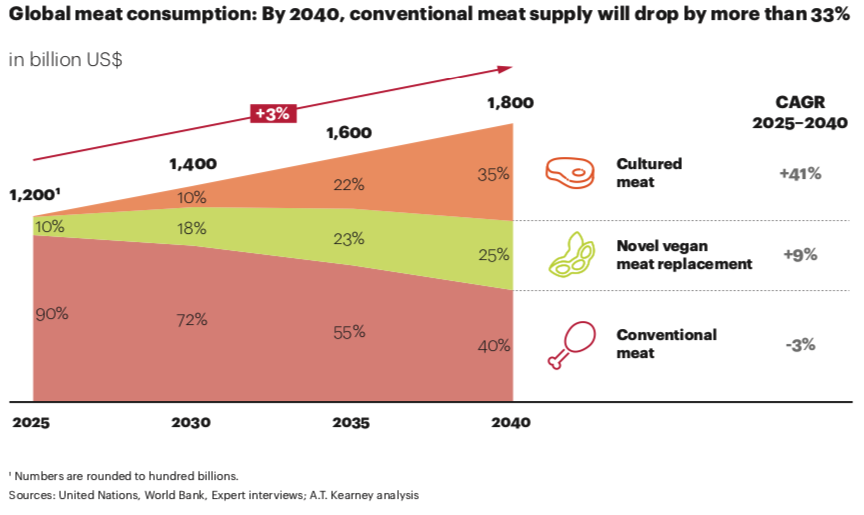 There is always a but

Are we then writing the chronicle of a triple victory, for the environment, health and - above all - the economic system? Maybe.

While there is no doubt that intensive farming-related emissions - mostly methane - and those related to grain cultivation are set to decrease in this low meat scenario, the effects of these new foods on human health are less obvious.

Their nutritional values ​​are not so far from the originals they propose to replace - 100g of Impossible Burger have the same number of calories and the same fat content of an average burger, a greater amount of fiber but also of salt and carbohydrates - and Impossible relies on soy leghemoglobin to introduce the "bleeding" effect, which is decisive in eliminating the distance, even psychological, between meat and surrogate.

The latter, however, is a totally new substance in the food sector - genetically modified and extracted from soy roots, generally not consumed - and therefore "under observation" by the American Food and Drug Administration. The authority has so far ruled positively on its food safety, contested by some associations such as the Center for Food Safety, a non-profit.

As for the economic impact of the ongoing food revolution, while the ABC’s of meat risks are rewritten by startups and the new eating habits are developed among Millennials and Generation Z,  the lesser-known ABC, that of Archer Daniels, Bunge, and Cargill (to which the D of L. Dreyfus Company is added), the four multinationals that manage two-thirds of trade in grain and oilseeds, can sleep soundly: their grain will not become feed for cattle, but directly - and in various forms - for humans.